Organized by the French Center of the SEC

under the direction of Dominique Leroy 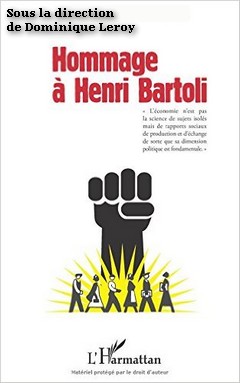 If the life of Henri Bartoli were a succession of multiple and concrete commitments, this “homage” intends to revivify and have intact its memory and testimonies of friends who felt through him an effect of plenitude in their own life.

These testimonies of recognition and admiration mention its courage, of the accuracy of its spirit and its human dash. Such qualities caused, between him and its interlocutor, the birth of a reciprocal freedom which one seldom notes since it is a question of solving contradictions inherent in the university life, citizen, associative or political. The resistant one to the believer, via the militant, the “revealing” of its humanity remained guided by the “hope”, itself maintained by favorable predispositions and a will without fault.

In its relations with the students, it avoided any immediacy and preferred the long maintenance which left time to look further into the personal link. Vis-a-vis the injustices which had been able to be perpetrated in front of its eyes, it had helped the victims “because it was then the thing to be made (…). There is not worthless glory particular to that”. In a general way, its optimism was obvious and it could write : “chaos of our lives must emerge a will of fitting of a world which is not already made, but to make, a radical requirement of creation”.

Henri Bartoli knew to defend of the intransigent values but without tension none. What can be explained by an equal and sure character of oneself, made tolerance and constant refusal to condemn or judge. He also granted to the culture a privileged function : “the culture consists in making and continuing, without slackening, an effort of universal communion. Its major problem is that of creation by ourself of our humanity, of the realization for all, concretely, of the right to be man”.

Short speech of opening by Professeur Jean-Claude Colliard, President of the University Paris I the Pantheon Sorbonne.

Transcription, starting from a video recording of Henri Bartoli, his interview on the “Call to the young generations” launched at the time of the Commemoration of the 60 ème birthday of the program of the National council of Resistance, on March 8th, 2004. The video can be consulted on Google at the address following :

In tribute to our friend Henri Bartoli : short speech of Marcel David (deceased on October 18th, 2011), professor emeritus of the University Paris I the Pantheon Sorbonne, with funerals of Henri Bartoli (Montmélian, October 7th, 2008)

Reading by Pierre Vormus, member of the European Company of Culture, the short speech pronounced by Henri Bartoli during the handing-over of the medal of Juste among the Nations (Paris, June 9th, 1999).

Guy Coq, President of the Association of the Friends of Emmanuel Mounier : Henri Bartoli in way with Mounier