TOPICS TREATIES in the last 20 years

Plurality of cultures, cohesion of the societies and “civilization of the universal” ― Tolerance between theory and reality today ― the Europe of culture in the new East-West climate (1988) ― the dialogue : the affirmation of the principle to his realization — new Europe and cultural policy (1990) — reason of State and reason of the man at the end of the 20th century — divisions, divisions, new aggregations ― armed conflicts , hotbeds of tension in the post-cold war era, culture (1994) — interference, solidarity and cultural trends desagregatrices and globalisatrices — policy interdependence in society of today ― “Peace” which does not have alternative war : the case of Europe.

Human rights and interference humanitarian ― the requirement of democracy as the criterion for international legitimacy and as a factor of peace — Ecumenical Dialogue and dialogue between world secular and religious world — new approach to North-South in the economy overall – the growing role of society as a political subject and the cultural policy ― commitment to integration and enlargement in the European Union.

Culture and cultures in Europe and beyond (2003) – intra-European dialogue between the East and the West : new challenges (2004) – of the European Union to the European union (2005). -Politics of culture in the dialogue of civilizations – European values and communication (2006) – our present crises and the ethical reference. Call for dialogue (2007)

About 1500 in 60 countries of Europe, is West and America, North and South. Representing all disciplines and beliefs, members are called to a demanding dialogue that is specific to the divergence of views, in the will to exceed to arrive by the cultural policy for joint action in response to the great challenges of the today.

A dozen, which stand manager independently, have the task to the national or local level, to publicize and promote the company, his thought and action.

It is recognized, according to the Italian law, the quality of being ‘di notevole interested storico’.

The European society of Culture, in institution which brings together study and action, deals with the relationship between culture and politics.

Through his research and his reflection always repeated on general developments of the present moment, it aims to identify priority objectives for a culture that recognizes ethico-political responsibilities in the sense of understanding, collaboration and peace, to which contribute through genuine dialogue.

She gave commitment a theoretical basis from the concept of cultural policy, which she continues to deepen the reasons, while it works to disseminate knowledge and practice.

(taken from texts of the founder)

“The dialogue will be designed as the spiritual process determined by the meeting of two different ideas which tend to a common truth.”

“Politics of culture assumes the moral essence and the social reality of the culture… It is located in both ideal and real space between two historical moments, the present and the future, and she is aware of having to contribute to the creation of the latter…”

“A peace that has the same value for all.”

the logo evokes “city of man”, “know yourself”, dialogue

The S.E.C. formally established in Venice in 1950. But from 1946, when Umberto Campagnolo entered the first international meetings in Geneva its project of a European society of culture, the idea was received with favor by number of creators, among the most representative then : get out of the “ivory tower” to operate collegially on the public stage, not as a subservient, but on behalf of the universal values of culture. Ideally, the initiator saw this institution “as the body of the current social function of culture. A function mainly of peace and freedom, peace and freedom linked indissolubly that absolutely interdependent because… “And he added : this rather new conception of culture has penetrated into many spirits and the sense of responsibility always asserts itself more effectively in men of culture”. Is recognized in fact of such personalities : Julien Benda, J.D. Bernal, André Breton, Marc Chagall, Benedetto Croce, Eugenio of Ors, Mircea Eliade, Jaroslaw Iwaszkiewicz, Karl Barth, Thomas Mann, François Mauriac, Giuseppe Ungaretti, Hans Urs von Balthasar, Giorgio La Pira, Henri Matisse, Jean-Paul
Sartre…

During the long years of the cold war, the company used to defend the principle of dialogue and tried to actually open a dialogue East-West.

Without never neglier the European theme, it has similarly been brought by current developments to wonder about many issues related to the phenomena of globalization. 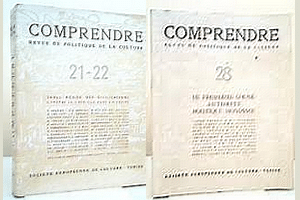 Universality of culture
The construction and the use of the atomic bomb
Culture and the iron curtain
There is a crisis of art
Moral and political dialogue
Totalitarian and political crisis of culture
Reality of Europe
Power and culture : the new continent
Soviet power, communism and culture
The British Empire, problem of civilization
Humanism today
Civilization and Christianity
The accession of China to the status of great power
The India in the dialogue of civilizations
Africa’s entry in the history
The “international issue”
The ‘cold war’
Culture and religion
The problem of a global political authority
Peaceful coexistence, ideological competition, dialogue
THE O. UN, States and public opinion
Democracy and culture
The challenge within reason
The historic commitment of the man of culture
Crisis and Utopia
War and moral combat
The sense of history
Ethics and politics
Violence and dialogue
Europe, the reality of a utopia
The Europa, cultura, the pace
General index (our 1-50), first part