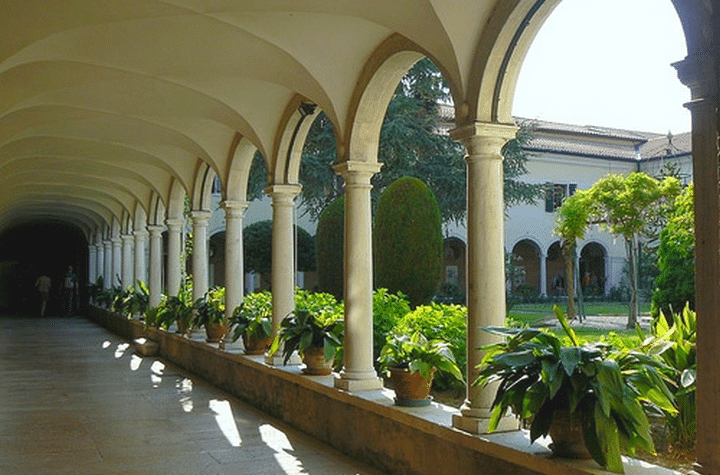 Tradition and innovation contributed so that the statutory plenary session of the European Company of Culture proceeds well in Venice, but in a new place, namely in an island entirely restored, made functional and functioning. That from March 31st to April 3rd, 2005. This session was placed under the high patronage of the President of the Republic Italienne, under the auspices of the Venezia Region, the Province and the Commune of Venice ; it was organized in collaboration with International Venice University and San Servolo Servizi.

The duties of the food-growing policy referred to a great topical question located work in the middle of the Institution, where the dialectical one between the European idea and to become to it European is fundamental and inside which it was placed according to a coherence rightly put in obviousness. This dialectical, indeed, is in a report of filiation at every time of the course achieved, with the tension towards the more authentic expression of the ideality of Europe.

In the present circumstance, under the title “Of the European Union to the union of Europeans”, the matter was thus defined : To make join of all the horizons of the S.E.C., Americas understood, knowledge and opinions on the state of the Companies compared to the institutional form of the European Union which goes structuring itself and ramifying ; to try to take the measurement of the great caused hopes, but also of the variation which exists between these two realities. Especially, however, to renew the critical and affirmative conscience of the “europeanity” as stripped contingent interests ; to reinforce in this direction the task of the culture, which is to make this conscience present and acting, in the conviction that it is from there that will be able to grow the institutional construction best fulfilling the requirements of the history, today and tomorrow.

Placed in order, therefore, of the food-growing policy, work carried to retain and look further into the reflection, thus to direct the efforts according to the following lines :

Without the union of the wills of the people, the European nations will not succeed in gathering in the common institutions and producing an effective policy. That supposes that are taken up the challenges which consist in making a democratic deficit, to update the ethical reference marks of the democracy, to educate with the federation of the nations.

To ask the question of the unification as regards people is capital. Because if recognition of the common values, on which to found the European citizenship, is present in the texts of the Community, a true identity conscience expects its maieutic. It is a task of the culture there. A morphology of the European identity can find its symbols in Prométhée, Périclès, Socrate and Antigone. It is synthesized in the assertion of the freedom and equality of the human beings. So that the feeling of membership has the force of a positive vision which relates to the future, it must pass by a reunification of the historical memories. It is about a duty of the present, to continue without slackening, while realizing persistent depth of the mental structures forged by the national State. The construction of Europe which is not minimalist, but made Europeans, could not force its times, those of the moral life, which are different from those of the economic life.

Similar creation without gaps, similar advance without short cuts calls a new approach in all the disciplines. In fact were evoked : the question of the languages where it is a question of balancing the supervision of the idioms and the requirements of the communication ; importance of the reading and the libraries vis-a-vis the magmatic offer of Internet ; the need for a jump of quality in coordination between the universities, because today research carrying to the essential innovations must set excellence like sufficient level.

To reconcile the market and the social one, is needed that the economy imagines new solutions, therefore which it is driven within the space of the policy and of the culture.

The identity potential and the stabilizing capacity of the single currency, which have ethical implications, are with being better apprehended.

The from a legal point of view, starting from the recognition of the remarkable asset that the present stage of the EU represents, the layout towards a constitution melting the European political subject is broken, because it is a question créativement of harmonizing internal rights, international law, Community law. Of come better as much are the recognizable signs of the formation, like a substrate, of a European civil society, demonstrations does “others”. They represent a testimony of tolerance and solidarity between individuals, but also between local groups, which contribute to give a heart to the body – without touching with different the ways of life with their traditional characteristics.

The passage towards the union of Europeans – and to even propose beyond – will depend much on the agreement on a new development model, which is durable in other words which measures the economic growth with quality of life. It is a question of binding the safeguarding of the environment to the social progress in a participative logic, which requires a general effort of sensitizing.

From the point of view of the S.E.C., however, this to become European, this tension towards the union of Europeans, could limit itself to the political borders of the EU, neither in her current configuration, nor in that of a foreseeable future. The feelings of discrimination which one can observe among nationals of more or less nearest or probable applicant countries do not take place any to exist there or Europe is considered in its axiologic borders. In addition, it is obvious that the Union exerts a strong power of attraction as a passport of democracy. By far, more than of near, it is perceived as the expression of the ideals which inspire it, like one dreamed of freedom realized, like the entity, inside which the irresolute national problems will find their solution natural. In this direction, it has virtue of example. But this heritage of thought which makes the “europeanity” represents a commitment to assume and live everywhere, with a sure and firm auto–conscience, on the one hand, and in a spirit of opening, on the other hand. The hour is with the true dialogue, with the dialogue which costs, such as always preached this Company, extended to other civilisations, in a will of comprehension and based on the reciprocal respect.

“For a policy of the man”, this current program expressed at the time of the Fiftieth anniversary, with its essential humanism, was recalled in its exemplary and kind, kind capacity for all and each one in front of concrete situations, which require a commitment as well collective as individual.

For ideal Europe, there are awakening and listening. Real Europe is moving. If the culture is creation of values – it is the definition in which the S.E.C was recognized – the food-growing policy plays a great role to play, whereas it is a question of creating not traversed courses, to invent new solutions, through which to inform the convergent movement between Europe of the idea and Europe of the facts, and that even if the convergence point is located ad infinitum. A Cartesian encouragement with confidence in the force of the thought is of knowing that this one is the form of knowledge, to which the object is ensured from the start, without need to seek it.

The General Assembly, in her XXVIe ordinary meeting, elected by acclamation with the international vice-presidency the Mexican painter Raùl Anguiano. The Maestro enters thus, while going up towards the past, in the line of Leopoldo Zea, Angelos Angelopoulos, Charles Percy Snow, Arnold Toynbee, E.M.W. Tillyard.